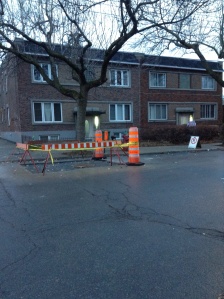 On Saturday afternoon I turned on the tap and. . . nothing happened. The water was cut. For a couple if days workmen( and women!) had been digging a mysterious hole at the corner of my street. I admit to a few illegal trips through the lane to allow me to get around the blocked street but I thought that would be all I’d have to put up with. Not so, it seemed. I threw on an old jacket and went out to see what was going on. Another of my neighbours came hurrying down the street waving a slip of paper. “Ah, someone got a notice about this” I thought. Turns out the notice warned her that water would be cut on the following Monday! The city worker who was enjoying a quiet cigarette in the cab of his truck kindly explained to me that my lack of water was “irregular”. Seems the pipe broke as they were doing the repairs and it would take another 5 hours to fix it. When I pointed out that my neighbour was in a bit of an ” irregular” position too since her notice was not correctly dated, he put me straight on that too. After all, it’s not the workmen who send out the notices, is it? He assured me that as soon as the pipe was fixed that would be the end of my troubles. “We’re working on another sector next week, Madame. No problems for you”. By now a very cross Russian lady was banging on the other window of his cab, demanding how she could cook supper with no water so I thought it prudent to go off home.

Yesterday I found a notice in my mailbox warning me that I would have no water next Saturday for eight hours.

I am happy that someone is working on the infrastructure Montreal. I am a acutely aware of the need to stop wasting water through the worn out supply pipes of my city. The operative word here though is “working”. Today the site is deserted, filled in, waiting to be dug up again next week, I guess. Could we get it together and at least look as if work is coordinated, as if there is a minimal communication and efficiency between government departments?

There are many demonstrations against budget cuts and austerity measures these days. I have been reluctant to join in because it seems a rather simplistic idea to me. We are drastically in debt here in Quebec, in Montreal. Yes, we need to increase revenue, and to save our services and institutions. More than that we need to ” work smart”. I have the impression that work methods are as old fashioned and inefficient as the leaky old pipes under our streets. I would more inclined to join ” solidarity” demonstrations if I thought public service workers were getting it together. I know one personal experience should not form opinion, and it doesn’t. Another thing that repels me is the adversarial attitude that encourages confrontation rather than dialogue. The government decrees and the protestors take to the streets with pots and pans. Not a very good example of ” working smart” on serious problems.