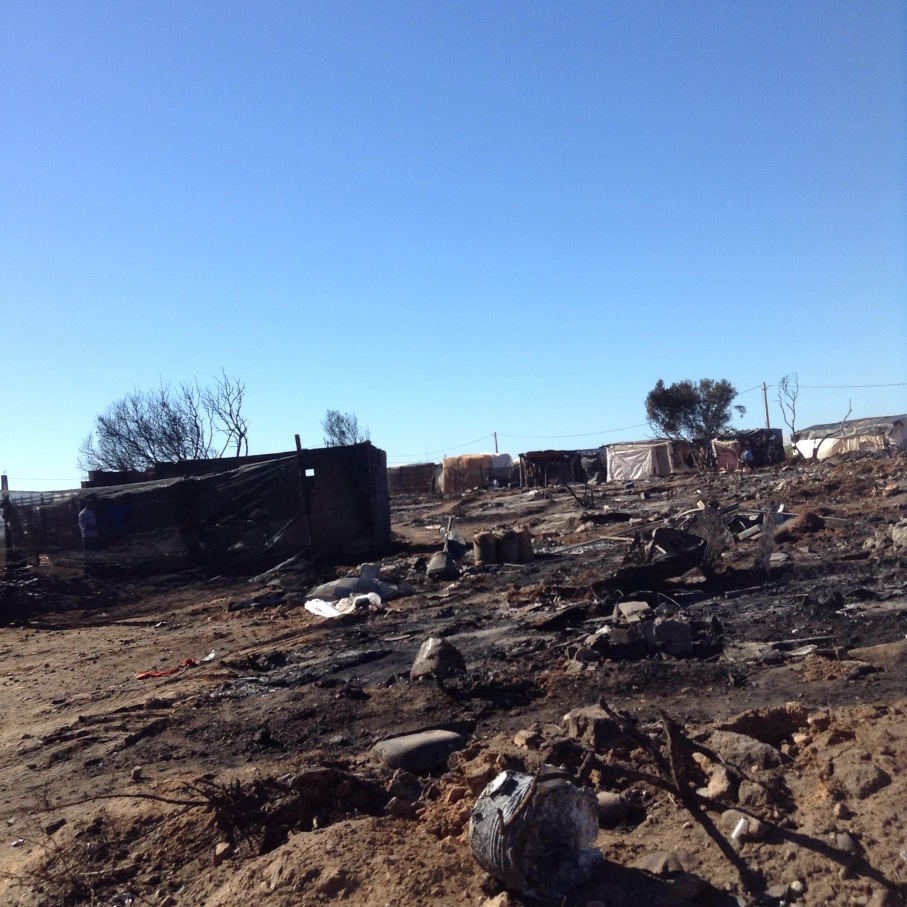 Hell or purgatory. Choose! I suppose purgatory at least holds out some hope no matter how faint.

These are the shacks of workers who tend vegetables in the plastic greenhouses close to where we are spending some time this winter on the south coast of Spain. Huge swaths of the province of Andalusia have been swallowed up by these enormous agricultural enterprises. How much? Well, you can see the development from space!

The workers are Morroccans, sub-Saharan Africans and  a sprinkling of Eastern Europeans. Many of them go to work on bicycles. Some live in apartments in the small communities around the growing areas and many live in shanty towns made of lathe and plastic weighted down with stones. We have been told:

” They steal electricity for their shacks. ”

” They have cell phones. Some even have cars.”

” It’s better here than where they came from.”

” They send all their money back to their countries.”

Last week, driving to town to  we were horrified to see that some of the shacks had been burned down. To my initial consternation, Joe suddenly stopped the car, jumped out and began to talk to a man who was dragging together a few sticks with a view to ” rebuilding” I supposed. He told Joe that someone had been cooking with bottled gas and due to the high winds that have been prevalent lately, a fire broke out and quickly spread. Of course, there was no water supply to control the fire. Miraculously no one was killed and those who sustained injuries were treated in hospital. It seems workers in the ” plasticos” are entitled to medical treatment in Spain.

That benevolence reminded me of 19 th century coal companies that offered a ” dispensary” to workers, many of whom died of black lung or ” retired” with no pension after suffering mine accidents.

Joe has an intense interest in others. Sometimes my legacy of British reserve calls it “being inquisitive” but in this case I admired him. The worker wanted to talk to Joe, to answer questions about what had happened. Joe recognized him not as “one of them” as ” the other” but as a person who had suffered a great misfortune and who had a right to tell his story. If I was cowardly and stayed sitting in the car, I owe it to that man at least to write this.

Is this the price of cheap vegetables and fruit in Northern Europe? If the home countries of the workers are hell…..is this not purgatory? Today it very windy and there are many white-capped waves on the sea between Spain and North Africa. Stay a few days yet in hell. Purgatory will wait.

2 thoughts on “The price of tomatos”