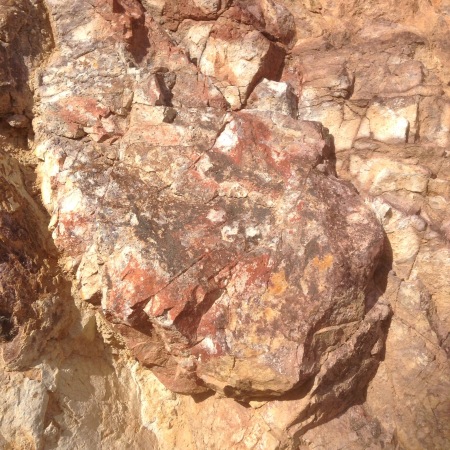 That is an old Greek expression that means you can expect to meet people with whom you have some sort of connection as you travel around on your journey. That certainly was the case yesterday. We went for a long walk on the sandy beach of Capo de Gata and then settled down for a drink at a sea-side café. Joe went in to get the coffees and emerged triumphant with a compatriot of mine. Turns out this lovely Welsh girl could wave across the estuary to my cousins’ place in Llanelli. How lovely it was to hear her soft voice telling us her story! An intrepid cyclist (like my own daughter, Elizabeth) she was travelling over the mountains of Spain and had just finished three nights of camping in some abandoned houses in one of our favorite villages, Rodalquilar. I must say I admire people’s capacity for going on these adventures alone but as she explained in her quiet and modest way she was on an “interior journey”. No more was said about it and I thought how typical it was of her not to expand on what that meant – as so many would have. We were joined by a gentleman who obviously had some mental health problems – his desperation for us not to ignore him or leave made him talk non stop. Since the other two people at the table were the soul of kindness (Joe and our new friend Claire) I was free to throw out a few comments of a darker nature – sotto voce of course – about the need for “turn taking” in every conversation. Not to worry, all was carried away in the torrent of his fervent discourses on everything from philosophy to poetry and beyond. When he mentioned Mount Olympus I managed to convince him that I had, many years ago, climbed up to the refuge and spent a night there. He insisted on running home to get photographs of his own trip and in a few moments I was astounded to see him posed in a photo in front of the railings of the stone chalet where I once spent the night with my daughter, Helen. It was a mirror of the picture I have at home and as I looked around the table I thought how odd that the four of us should somehow have met that afternoon and woven strands of our time together.  “Only the Mountains do not Meet,” indeed.

As for the pictures of various local stones, they are proof that in some circumstances, even the mountains meet! Joe, a geophysicist by training, explained that millions of years ago volcanoes in the district spewed out lava that compressed various types of rock and melted them together forming a “melange” The melange at our table was interesting, beautiful and quirky. However, unlike the rocks of ages we were destined to part with many a promise to meet again.

This post today in honor of Mary Oliver who died yesterday. Explore this wonderful poet if you do not already know her. For humbler offerings see my poetry book, “Northern Compass” available on Amazon.com and Amazon.ca

2 thoughts on “Only the Mountains do not Meet”