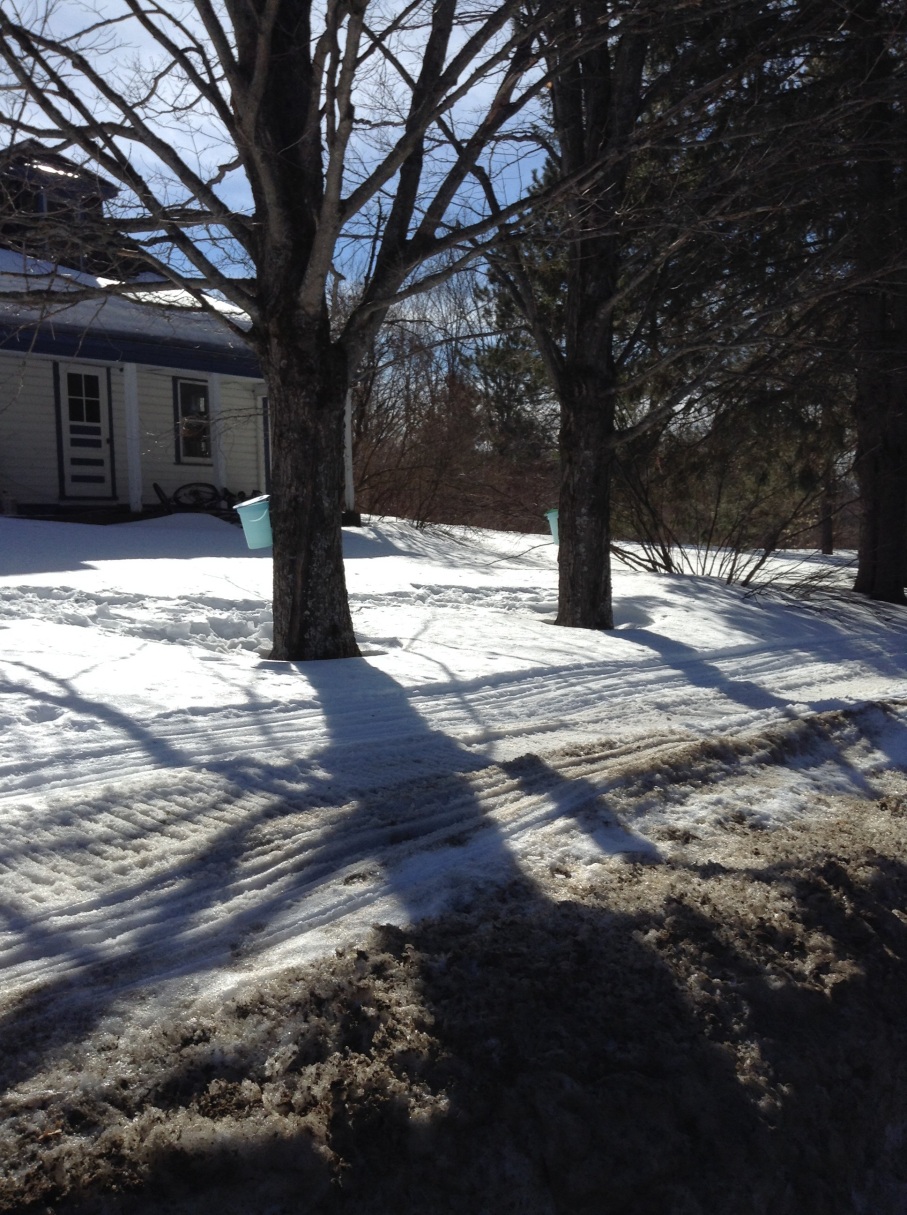 Spring, like a well-loved old movie star is making her appearance a little too soon.  Of course we adore her and welcome her with open arms, but….I get a little uneasy when I see maple syrup buckets out at the end of February.  This is mid Ontario, for heaven’s sake!  We are not supposed to have torrents of rain at this time of year.  That was supposed to be a blizzard we could brag about to our grandchildren.  I never thought I would see the day I’d be happy to see a little “correction” in the weather forecast with a low tonight of minus 20.  We’ve gotten into the habit of letting the fire die down in the stove late in the evening and not putting a log on for the night.  In February and March!  The wonderful Spring light is encouraging, of course.  This house is built on a big stretch of rock that heats up fast and already the snow melts away revealing that rather steep dark curve down to the driveway.  I imagined it might be slippery considering the rain and ice storms we’ve had but no, somehow it allows our boots to grip the surface very well so that no unexpected shocks occur.  That rock is like an old benign grandmother that just holds everything up and would never betray us by being slippery.

I wonder who thought of boiling maple sap to make syrup.  She must have been a very persistent person. You have to boil down forty gallons of sap to make one of maple syrup and that’s a lot of fuel to expend when you’re not quite sure what the result will be.  I love maple syrup and I am looking forward to trying birch syrup this spring too. That is not boiled but rather drunk right from the tree.  The tree is tapped in the same way as maple trees and this is a traditional drink common in Russia, Poland and other parts of Eastern Europe.  I was surprised to read (good old Wikipedia ) that it was traditionally given as a first food to newborns in Scotland.  Can’t imagine that in Glasgow!  I thought it was fried Mars bars up there. It says birch sap is good for the hair so I’m surprised more men who worry about such things don’t rush out to the woods to rub it into their scalps.  Spare us from commercial exploitation or there won’t be one graceful birch untouched.

There is something wonderful about embracing trees in early Spring and drinking the sap from these faithful ones who have endured the bitter winter.  Is it a magic idea that the strength and life affirming liquid of the trees can help us carry on too?  I shouldn’t even be thinking about these things yet though. It’s a little too soon. If our sweet old dowager Spring can just hold on for a month or so I’ll be the first to roll out the green carpet.

One thought on “Your cue – I flip the calendar”