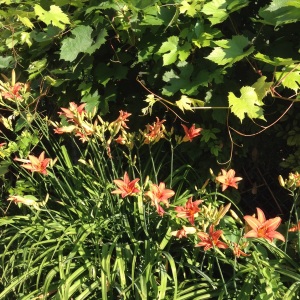 Is it midsummer? Well, the longest day has passed. In spite of the wet summer the flowers insist and will have their way, they will come out. When I see the Orange lilies I really believe it is summer. The first summer we were in Canada my father had a mania for driving us around and showing us parts of Quebec. To tell the truth I think he liked driving around in a big car. The first car he bought in Canada was a little English car but within a month he had traded it in for a huge blue Mercury. Perhaps the reason was that he forgot himself one day while driving the Morris and sped up Peel street on the wrong side of the road. It was prudent of him, then, to adopt a monster of a Canadian car which would find its own way around the town.

On one of those expeditions the following summer, my father took up us to Quebec City and to the Montmorency Falls. The place was totally undeveloped, just the silvery fall of water, tumbling down to run quickly across,the narrow plain into the wide St. Lawrence. I have like a snapshot in my mind the sight of the tall grasses and the stands of orange lilies, day lilies that bloom for one day only and are replaced on the stem with another flower. It made a great impression on me and in our family we called them Quebec lilies after that. If only we could be simple and true to the essential meaning of what it is to bloom for a day,and then relinquish our place, how beautiful it would be.

I have them in the lane along the line of my fence. The lilies are among the first green shoots to appear in the lane in Spring, coming up fearlessly, sometimes even getting pinched by a late frost. They never fail though and come back year after year in spite of the most bitter winter weather. One even encroached this year into my garden proper. Should I call it a garden? With all the rain and humidity it has become a well beloved jungle. I have only nominal control.

And the other pictures? Well. The dark clematis has sulked its way out. The other little new one only put out one flower! I hope it will do better next year. On the pink butterfly bush you can see one of my neighbour’s domestic bees. It is a new plant that has done very well. My neighbour has a bee hive this year so we must hope for more sunny weather. Very nice to have bees in the city, I think. Tomorrow is Canada Day. I will paint the mailbox red! Happy Canada Day to all. 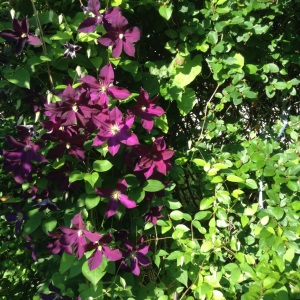