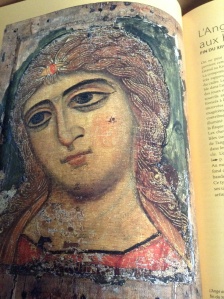 Here are two images of angels.  One is the original of the angel of the golden tresses presently in a museum in St. Pertersburg.  We don’t know where it came from originally but it spent some time in the bell tower of  the Kremlin during the reign of Ivan the Terrible.  The other is a modern copy.  I found both images in an interesting book about how to copy icons by two artists, Andre Fischer and Agnes Raynaud.  I picked it up in the gift shop of the Faberge Exhibition in the Montreal Museum of Fine Arts.  The book sets out in detail the technique of making a copy like the one below.  I want to discuss here what is appealing or not about both images.  If we look at the older icon, it has the beauty of the ages imprinted on it.  It is also, as far as we know, the original creation of an artist.  While it is true that iconography demands that the originality of the artist be subordinate to the requirements of rules, a “truth” about what is being depicted, if you will, still the artist here has imbued the subject with personality.  The large eyes are ringed with shadows.  Sadness?  Reflection?  The idea of a “bodiless power” having shadows under his? her? eyes is intriguing, is ‘t it?  I love the little jewel in the hair but the traditional ribbons are a faint vestige only appearing as a dark line on the left side.

if we look at the modern copy we have a totally different rendering of the subject.  Of course it is more vividly coloured. Somehow it seems more formal.  A new element is the naming of the angel.  High on the left the little oval that means saint and then on the right the two letters for archangel and his name Gabriel.  Once again, I am puzzled by that question, why is Gabriel a he?  I love the treatment of the hair and the obvious halo.  The tilt of the head is almost the same but to me the mouth and even the eyes are different.  To me the original is like an old friend whom we meet over and over again.  The new one reminds me of an introduction by name and with the vivid impression a new person can make.  Comparisons, are they so odious?

2 thoughts on “One angel, two angels”