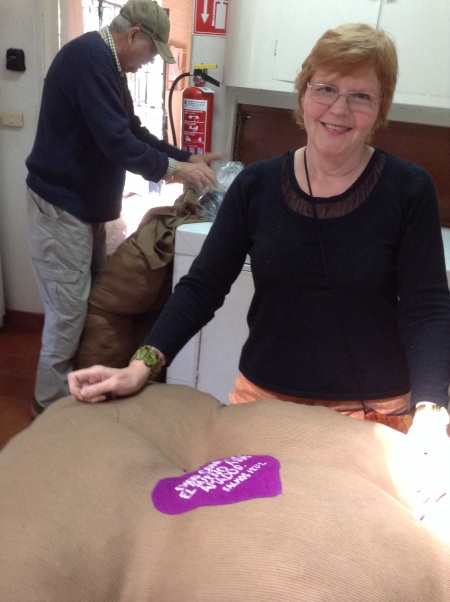 It is a little dull before the conference starts so I went on line and discovered that volunteers were required for a mysterious project making mattresses for poor kids who live in outlying villages of San Miguel.  The church ( trust the Anglicans!) was close by and it seemed a good omen that as I walked along the strap of my favorite bag came apart.  Well, I thought to myself, they’re sure to have some great needle and strong thread and I’ll be able to sew it back on.  The project was very interesting and ingenious.  The premise is that there are thousands of plastic bags all over the place so why not use them to stuff a mattress for a kid.  Whaaat!

I was very impressed to see two long tables set up and some very determined looking American women, some of whom had their husbands in tow, all set for two hours good work. As usual these gringas were very friendly and gave me the task of flattening out hundreds of clean but crumpled bags.  It was explained to me that I was to twist them into soft pads that would be used to stuff the thick canvas bags that turned into mattresses.  Many poor rural kids sleep on the beaten earth floors of their houses with nothing between them and the cold ground.  The idea of getting rid of the horrid plastic bags in this way was surely killing two birds with one stone.  I flattened bags while chatting with a very nice person from Victoria, B.C.  My bundle-making skills were not up,to par “This is too hard.  The mattress will be lumpy!” So I sheepishly retired to sew up the side of an already stuffed mattress.  I harboured a secret hope that I would find the nice curved bodkin and thick thread that would do the trick on my purse.  No such luck! I had to battle away with a totally inadequate needle  and go over and over the seam with ordinary thread.  I felt like  Oliver Twist or Cinderella out by myself in the kitchen toiling away. The more I thought about it, however, the more it reminded me of Rumplestiltskin, where the girl has to make straw into gold.  We were making something useful out of a scourge on the countryside…those damned plastic bags.  I was very proud of my sewing.  It was quite sturdy….well, I did have upholstery lessons once!

You can see in the picture that there is a little heart appliqué sewn on.  It is a verse from the bible..”He grants sleep to those he loves”. It seems a little unfortunate that the line before that in Psalms is ” In vain you rise early and stay up late, toiling for food to eat…..” Really, people!

My punishment for participating in good works was that somewhere in my day’s wandering a I lost thirty dollars.  I had worked out a very strict budget and put money in various envelopes and made notes in a little book…..very unlike my usual ” method”  The result is that the special envelope with a star on it ( this week’s money) is nowhere to be found.  Serves me right for trying to be organized.  I hope the person who finds it has a good few beers and thoroughly enjoys himself or herself.

I certainly will go back next week to the mattress factory/ church, and try to perfect my bag folding technique.  I might even buy a curved needle.  PS..  I stole two safety pins to repair my bag so I have to to return them.  I will try not to make cracks about the verse from the Bible. That would be a miracle!

One thought on “No good deed goes unpunished”