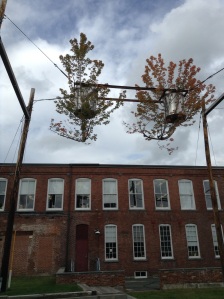 I had better start to write about some of the wonderful things here or I will be writing pieces about this magical little corner until Christmas.

I would not describe myself as a great expert or even much of a fan of contemporary and modern art….but…I had to be dragged away from the Mass MOCA.  What is that?  It is the Massachusets  Museum of Contemporary Art….but wait….it is housed in the coolest set of buildings you could ever imagine.  Lots of New England towns were mill towns in the 19th century- paper mills, cloth mills – .  These big manufacturing centres died off for various reasons.   Whole communities emptied out or dwindled, no longer attracting mill hands to support other businesses.  In the town of North Adams, a huge complex of buildings was left empty when the textile industry died and subsequently a company that made components of light bulbs also folded.  I don’t know who the genius was who thought it would be a good place for modern art was but hats off to her (!) modern art often requires huge spaces and this place has them.  I love the ” steampunk” feel of the interior.  The inspired people working on this project which was only opened in 1999, left the industrial feel of the whole place intact complete with huge steel beams, concrete floors, exposed pipes.  There are several buildings and access to one is a dark raised passageway that made me feel like a mill worker sent on some errand to another part of the factory.  The works are varied.  Joseph Beuys, door opener for modern art, Francesco Clemente whose installation of wonderful tents was facinating and beautifully staged in the huge space of this Museum, Clifford Ross with his manipulated photography! Jaw dropping and facinating!  Jim Shaw – so funny and loaded with narrative and philosophy! He even invented a fictional religion…..as if we didn’t have enough of those.  The picture I chose for,this,piece is of two trees that are actually suspended and fed by a sort of intravenous system.

Such a a wonder to be able to have my eyes opened by the new experience of visiting this great place.  I can hardly wait to read up on all the artists and to visit again.