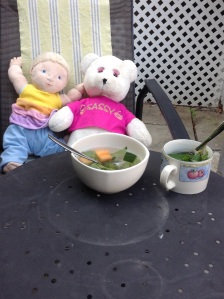 My grandchildren visited me today. They have a few favorite games. Doctor is an old favorite but somehow it is more of a winter game, best played in the muffled basement where the hapless patient is questioned by my granddaughter. Come to think of it, she never wants to be the patient. With two older brothers and a handy letter opener which serves as scalpel, wo can blame her. It never really got off the ground today, although there was one interesting case of a patient zoo-morphing into a seal ( his main symptom was that he kept calling for tuna and stroking his new moustache).

We finally settled on restaurants, always popular as a garden game. I have absolutely no problem giving the kids pans, utensils, knives, breakable China or tablecloths to add to the authenticity of the ” cooking” process. I have a huge grapevine which provides lots of green leaves for the various soups, wraps and desserts. I was even offered a “soufflé” of twigs, grape fronds and dried up astibe. Soup is most popular as it involves pouring water from an old Royal Doulton teapot into various pans and flower pots….simmer well and serve. Garnish with grass clippings.

The kids have had some exposture lately to Downton Abbey it seems and I was cast as the hapless Daisy, the kitchen maid. When I asked if they were going to feed the dolls, my granddaughter, channelling the redoubtable cooks snapped. “For heaven’s sake, Daisy, we’ve made the food. Can’t they eat it by themselves!”

An attempt to combine doctors and Downton Abbey resulted in her ladyship and the boot boy tumbling out of the carriage ( a rolling office chair) into the lake. Tom, the nasty footman had to go and pull the horse out of the swamp. All too soon it was time to go home. The toys remain unfed but I think I will wait until cover of darkness before I raise a spoon to their woolly lips. Already the neighbors are casting suspicious looks over the fence.

One thought on “After the Teddy-Bears’ Picnic”