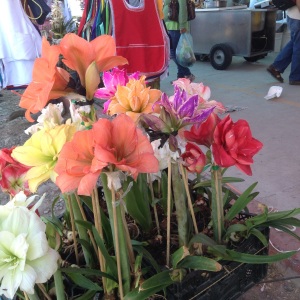 It is astounding.  I went once last year but I had forgotten the sheer size, noise and variety that confronts one at this huge weekly market. It takes place well outside the city.  Finding the right bus was a bit of a,challenge as I had to look up a few words in the dictionary and then construct a sort of question about going there.  Well, it worked and after a ten muinute bus ride up a windy hilly road we arrived and trooped over an overpass.  Tiny children and ancient crones managed to get up and over the highway and then we decended into a dusty, noisy, chaotic, seething mass of humanity all hell bent on a bargain and a damned good meal.  Some of the most popular tables were second hand clothes and I saw quite a few gringas supplementing their wardrobes.  You name it, the San Miguel market has it.  Shoes, knock off clothes, lurid underware, tools, cosmetics, toys, kitchen utensils, electronics, fruit and vegetables of astounding quality and price, cowboy hats. . . .well, the few pictures I post should give you an idea.  All this shopping can make a muchacho hungry and there are several makeshift kitchens set up.  Fried fish is a great favorite and the smell is wonderful.  Tamales,cook on griddles and some sort of pork and onion combo twirls on a spit a bit like a Mexican version of gyro.  The drinks are huge and thirst quenching.  I had coconut juice in a small bucket. I prudently only drank half as the ” banyos” at the edge of the field did not appeal to me.  I met a few friends, as one does in San Miguel, and we decided on steamed fish.  Who knew nouvelle cuisine had wormed its way into the big market.  We had fish, steamed veggies and very hot sauce out of a piping hot styrofoam container and withdrew from the tables and chairs, for,shade and to avoid the earnest singing of a woman with a microphone.  She raked in quite a few tips.  Oh, I,forgot that some people didn’t have stalls but wheeled their,stuff around in wheelbarrows ( wonderful walnuts) or wandered around the market grounds hollering their wares…anything from carrier bags to clothes pins or sponges.  The sweets were out of this world…huge mounds of smarties, gummy bears, lickorice.  It was overwhelming.  I managed to find the knock off Real Madrid jerseys I wanted as presents for my grandsons.  I almost gave up,but finally found the stall right at the edge of the grounds.  Very nice too.  Needless to say I spent a good bit of time in the hammock later in the afternoon reading Thomas Moore’s ” Care of the Soul”.   Just the thing after a few hours in bedlam.

One thought on “The Tuesday market in San Miguel”