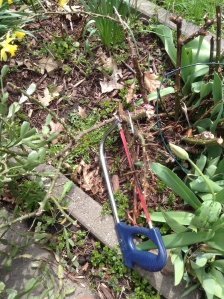 This is written in the Bourgie concert hall and I will have to run out and feed the meter soon. I was gardening today as you see. The roses survived and are sprouting pink shoots. One rose bush is very old and I must take the saw to it. Reminds me of the Secret Garden. Very busy downtown as there is a big hockey game. Got miraculous parking in spite of that. I tried to send this much from the bathroom in the Bourgie but could not add my pictures and it was just as well because now I can tell you about the wonderful concert I just attended. Maybe I will leave my visit to the Police Station until tomorrow. Yes, I will.
So, the concert was conducted by Boris Brott and featured the McGill Chamber Orchestra with a wonderful soloist. This was a young lady (really young – like 16 years old) who was an absolute viruoso on the cello and on the piano. Her name is ANita Pari and as an encore she played one of her own compositions “Strange Dance” except that it was wonderful rather than strange. She was a tall and slender young lady who wore a beautiful dress of a sparkly red fabric. Anyway, I will post a picture. I am going to write something about the orchestra too. I have to think how to do it. The wonderful thing was that I had been sold a ticket (rather against my will if the truth is to be told) and it turned out to be in the very first row right in the middle. I was a bit shy of my blue pants when I took my seat because  I had the feeling I was every bit on show as the orchestra. The program was: Overture to the Creature of Prometheus by Beethoven. I had never heard of this but it was great (Beethoven only does great) Then we had Eine Kleine Nachtmusik. My heart sank to my boots when I saw that on the program as it is soooo overplayed and a bit banal, I think. Anyway, being in the front row changed all that. I could follow the viola and hear the undermelody. I liked it very much. Then we had a cello and orchestra piece with the young Mlle Pari playing the most heart-rendering and technically challenging music you can imagine. I was utterly spellbound – and at this stage it takes something to do that. We had intermission and then a very unusual piece – Symphonic Chocolates. This was a piece in 4 parts by Maxime Goulet, the composer in residence at McGill. It was four movements based on a chocolate taste: Caramel, Dark, Mint and Coffee and they even had little boxes of chocolates – just 4 in each box and you were supposed to eat one for each movement. However they persuaded the Bourgie to let them do that I cannot imagine. They made quite a point of telling us not to drool or wipe our fingers on the seats. After that we had a Mozart concerto that I didn’t know very well, No. 12 in A major. This was another opportunity to drop our jaws (I said Jaws) at the virtuosity of Anita Pari who played the piano as Mozart himself would have wished. She gave us her encore as we clapped and clapped. The conductor, Boris Brott was very gracious and he even told us the hockey score at intermission. So, you see, it turned out very well that I went in spite of my reluctance. The picture on top is of my rose pruning in the morning. So glad it is warming up a little. The picture below is of our soloist. Watch her – she will be a big star. A demain lovies 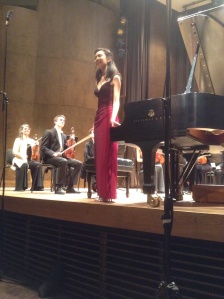